Tag: On Elegance While Sleeping

Book Review: On Elegance While Sleeping by Viscount Tascano Tegui 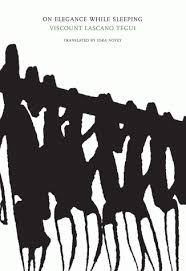 This book has an impeccable first paragraph that involves a manicurist, the Moulin Rouge, and an accusation of murder. I read the paragraph aloud to a friend over the phone the day after I read it, and I would paste it here, but I want you to seek it out on your own. I know that if you’re a book addict, nothing will stop you.

I love the title of this novella-length gem that is structured in a diary form with dates that move curiously back and forth in time. The short impressions leave you with an elegant array of surreal memories, some of which caused me to conjure memories of my own. Like all surrealist early twentieth century fiction, the sexuality of the book is pre-gender-politics. The narrator’s homosexual lust is taboo and “Sodomite” but he nevertheless indulges in lavish descriptions of beautiful men with a degree of lackadaisical decadence and a tinge of melancholy regarding the social structure of outcasting that sends one character from their small hometown of Bougival into the city of Paris, where he would develop into a flaneurish phenom. The same dagguerreotype-like impression occurs with the narrator’s description of his prostitutes and their abortions. In fact, one passage presents a brilliant meditation on life as the escape from abortion. The narrow window through which one fetus expels out into the world is a gift in spite of the myriad of abortive obstacles in the form of needles, poisons, and slices that occurred in a dark medical closet of an early 20th century whorehouse. The narrator’s memories of women and whores are eclectic in their sexual array from the eleven year old girl with forty year old eyes, who posed with her leg stretched out for him in a way he could never forget, to his disinterest towards the exoticism he ‘discovered’ after being invited to view of a medley of Arab women sans-veils.

This book takes you back to pre-Civil-war era Spain and its macabre poverty that strikes an alarming backdrop to the sketches. In that regard, this book stands out from the well-known French surrealists. It captures the rurality of the war that authors like Bataille were not able to capture (I’m thinking of his extreme depiction of the sexual transgression and urban violence during the Spanish Civil War in Blue of Noon). The narrator describes his hobby of pulling up dead bodies from the river that got caught beneath the mill in his childhood. He writes about Mary Rogers sitting in a flower shop that she runs, whose namesake is the famous victim that fueled a generation of mystery novels in England and France…that very Mary Rogers who Poe wrote about in one of his Tales of Mystery and Ratiocination. He writes about syphilis, rashes, scalp treatments, cyanide, and other bygone tinctures. While these impressions are never dull, they mount in an ever-increasing heap that grows into a deliberately grotesque assortment that becomes monotonous in its very entropic heterogeneity. The book ends with a sad and misogynistic finale in which the narrator decides to murder a young, destitute, English, blond woman whose lineage is scrutinized, like all of the other whimsical, but penetratingly sardonic caricatures of people. At times, the book presents itself as a meditation on death, but like all great tragic misfits, the narrator ends the novel in an act of absurd, base murder.

I crooned, laughed, and shuddered at the fleeting days-gone-by compiled into this diary-form piece of impressionism. I was impressed with the range of striking images and powerful control that the author exhibits. Perhaps the attitude of the book is summed up in this self-fulfilling prophecy: “Novelists overplay their hands when they put an end to their characters with some catastrophe–a terrible fire, a murder, what have you. They don’t trust the asphyxiating monotony of everyday life. The florist’s was no more fascinating than a piece of dried seaweed” (71). In reading this book, it felt as if I had entered a strangely perfumed sepulchre where memories refrained like gamelans, and statues crumbled to their final, awkward collapse.